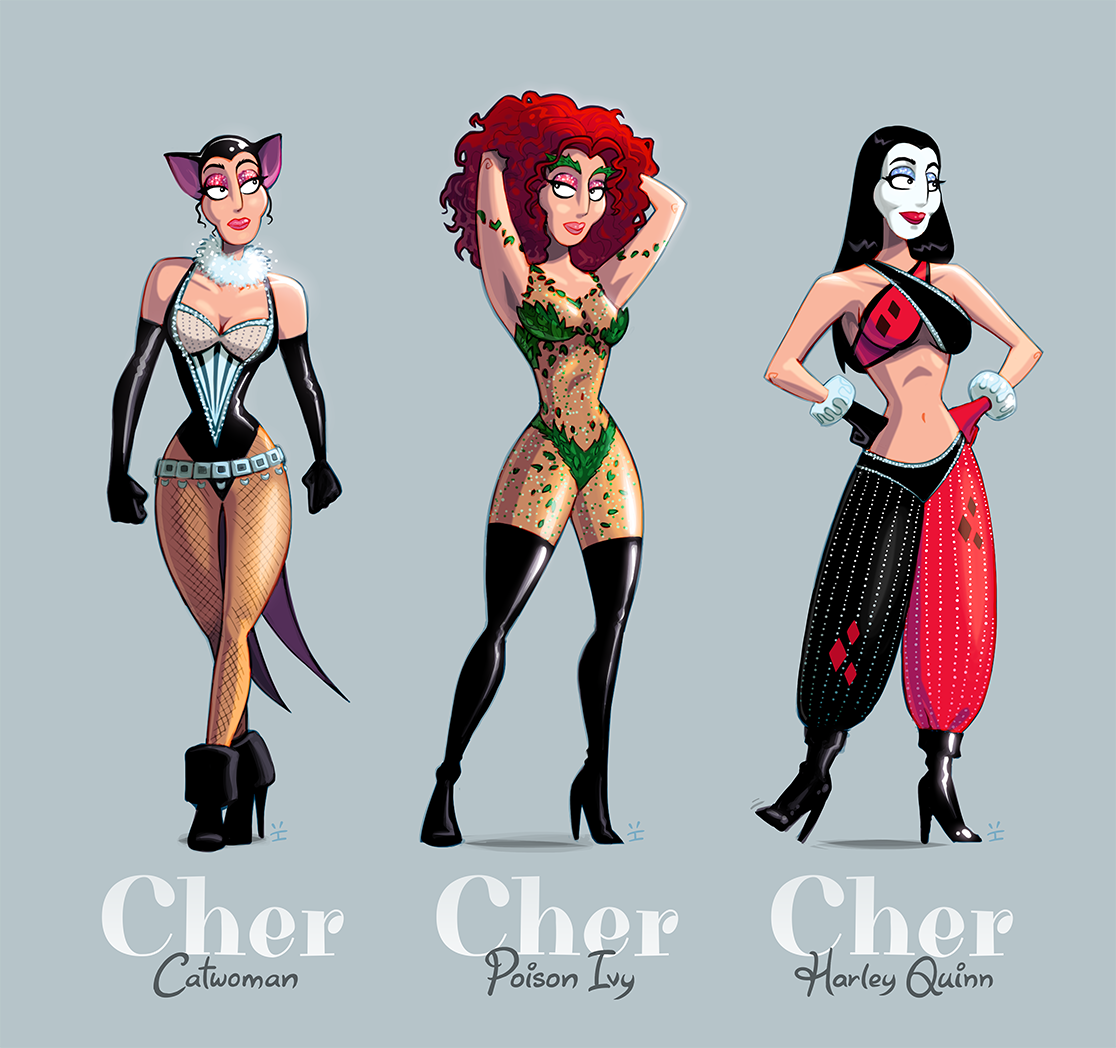 Greetings, fellow fans! It is Comic Con season right now so I wanted to make some geek art just for the kick of it. I hope you'll enjoy it! 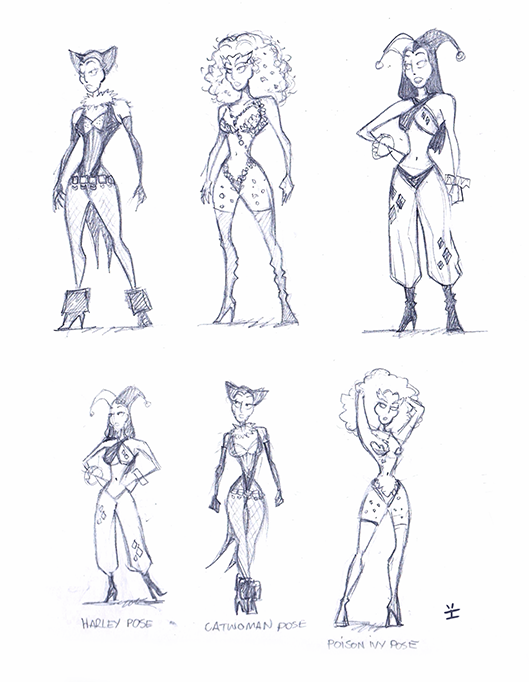 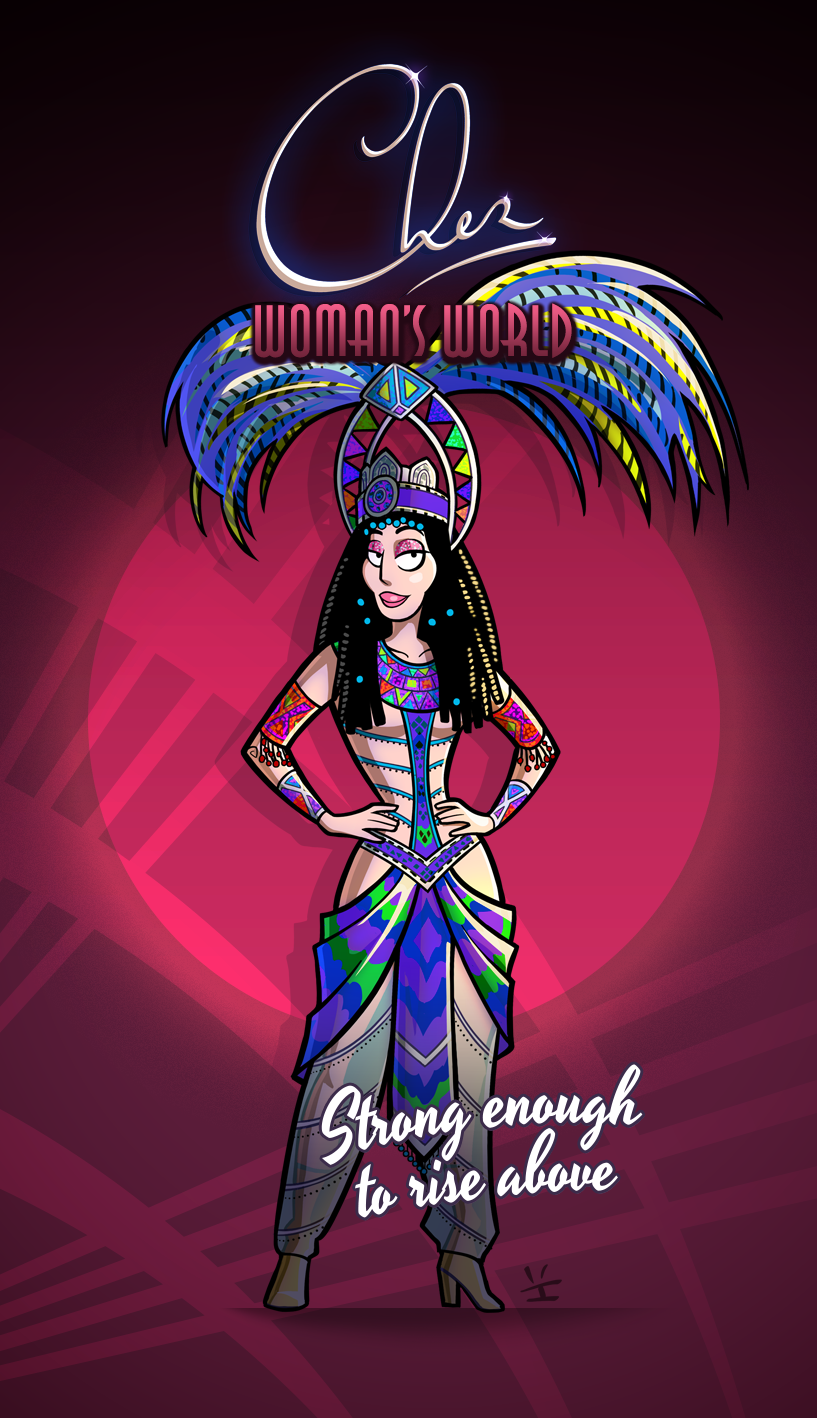 Greetings, fellow fans! The Cher Playing Cards are now available to buy from anywhere around the world!  It's very exciting to be finally sending them away to other fellow fans!

If you're interested in buying one of these very special decks of cards, I invite you to refer to this previous post for all the info.  Don't miss out your chance to own one of these very rare decks before they run out!

Today's latest artwork is from the D2K tour! It's already available in the wallpaper section. And have fun looking at the drawing process! 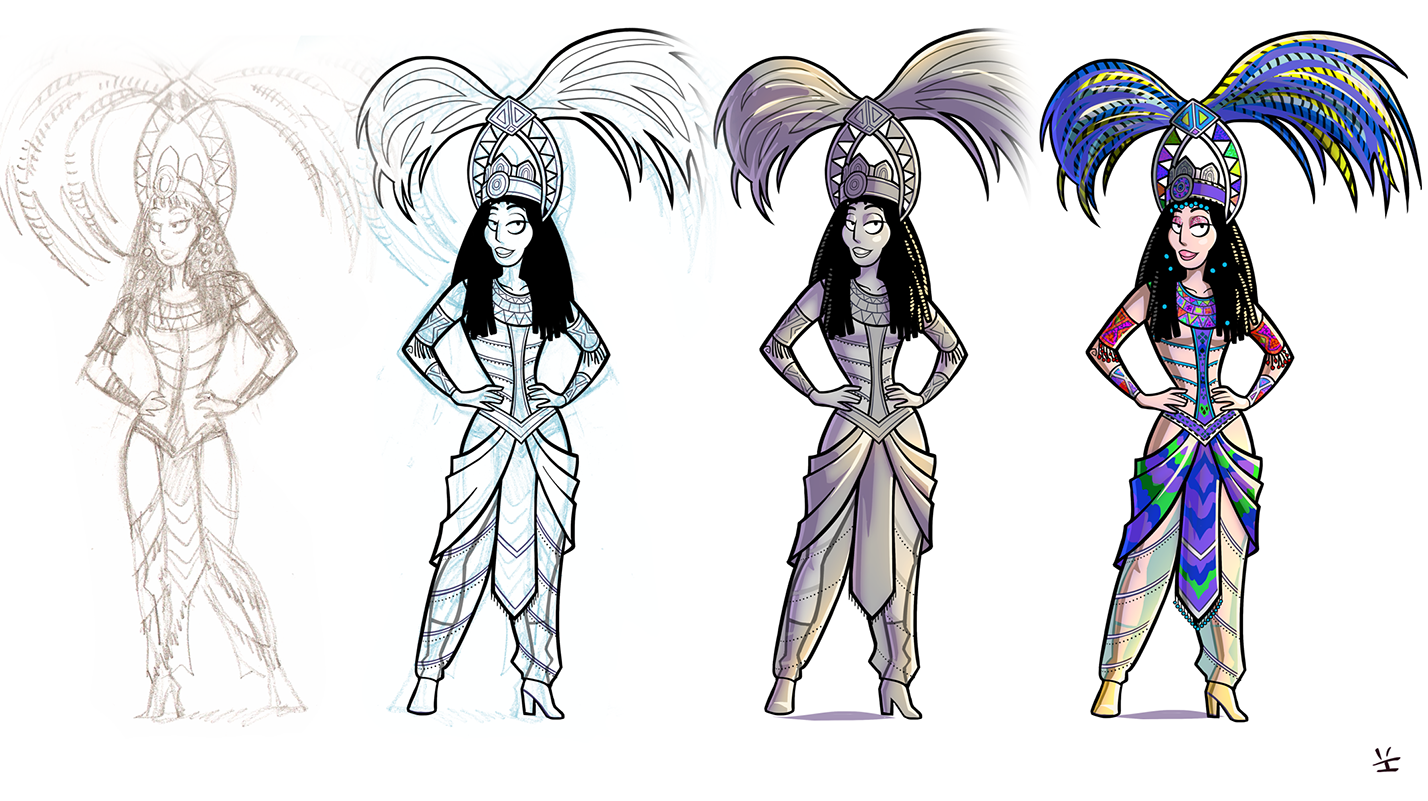 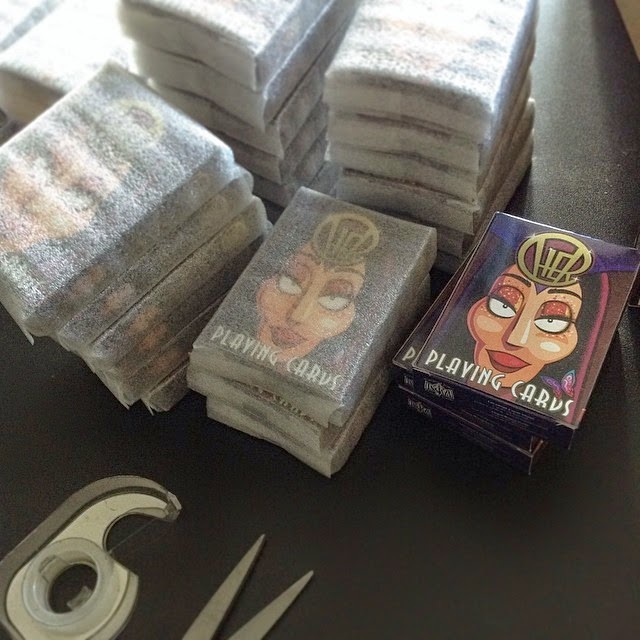 Greetings, fellow fans! I have been keeping busy preparing the first orders of Cher Playing Cards this week-end. Thanks to all the supporters! It's a nice feeling to know they'll be traveling all around the globe to reach other Cher fans!

Make sure you don't miss out on these cards: only a limited amount have been printed so first come, first served!
Posted by Ïve at 11:26 p.m. 4 comments: 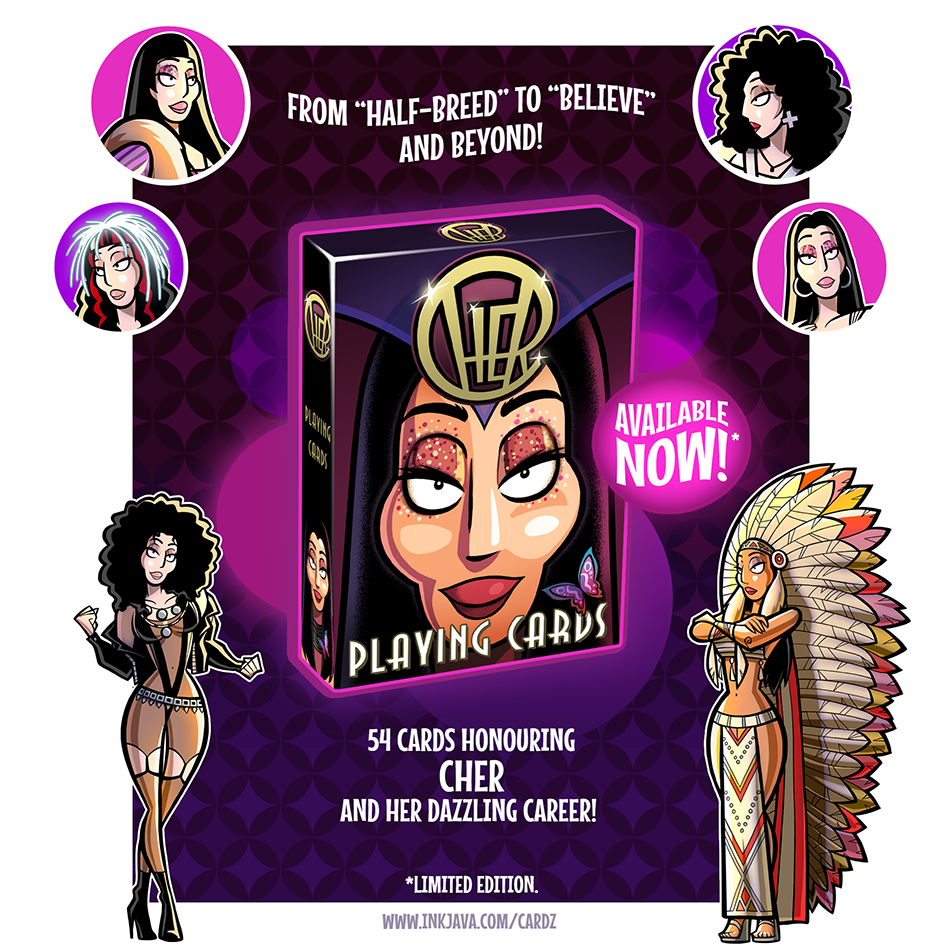 The wait is over! The CHER Playing Cards featuring 54 unique artworks is now available to order!

Celebrate the glitz and glamour that is Cher with this unique memorabilia that captures some of the most iconic looks of this all around legend. Through a delightful career spanning since the 1960's, the goddess of pop has proven to be one of the world's most enduring entertainers to dazzle audiences of all ages. Revisit her most exquisite gowns by designer Bob Mackie, discover the notorious co-stars with whom she embraced the silver screen and smile up to the late Sonny Bono gracing the King figure. This is Cher like you've never seen her before! *Wigs and beads not included.


Buy one, get one 1/2 off!
Shipping is included and is estimated between 6-10 days.
US and Canada: $18 US
Europe and Mexico: $20 US
South America, Australia, Africa and Asia: $21 US
Payment via Paypal.
If you're all set, you can send your payment via Paypal to me at: inkjava AT hotmail DOT com. Don't forget to give me your shipping address! ;) If you have any question or would like to request more decks, send me an email (inkjava AT hotmail DOT com) and I'll get back to you with a quote as soon as possible. CHEERS!!! 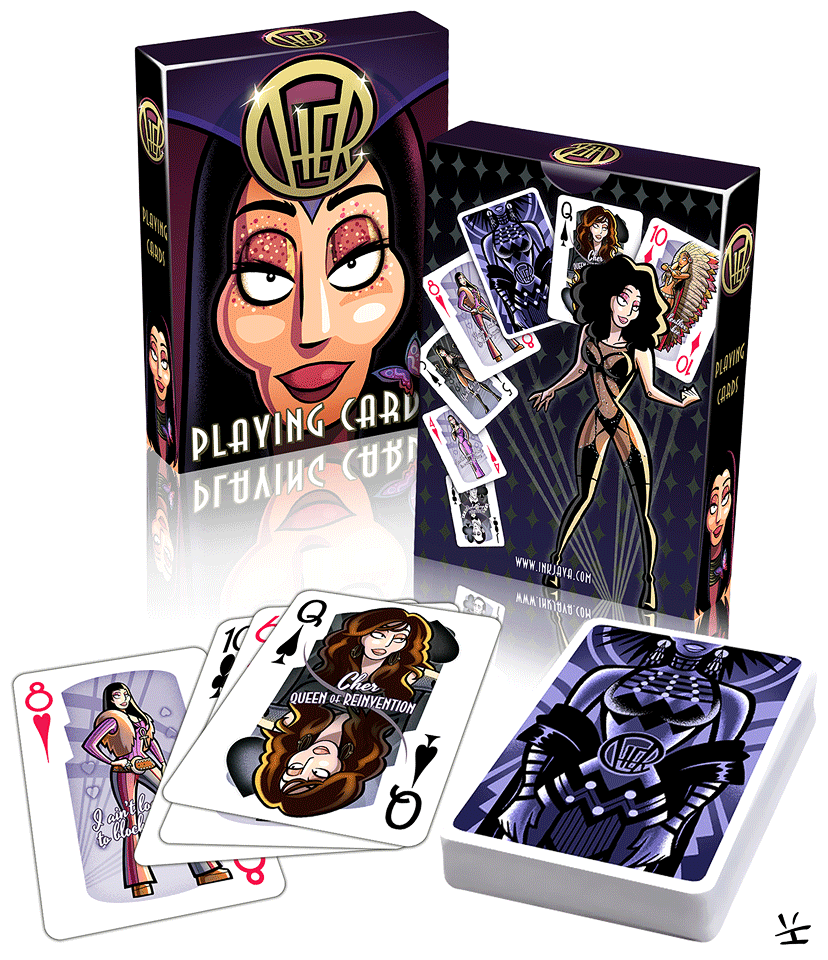 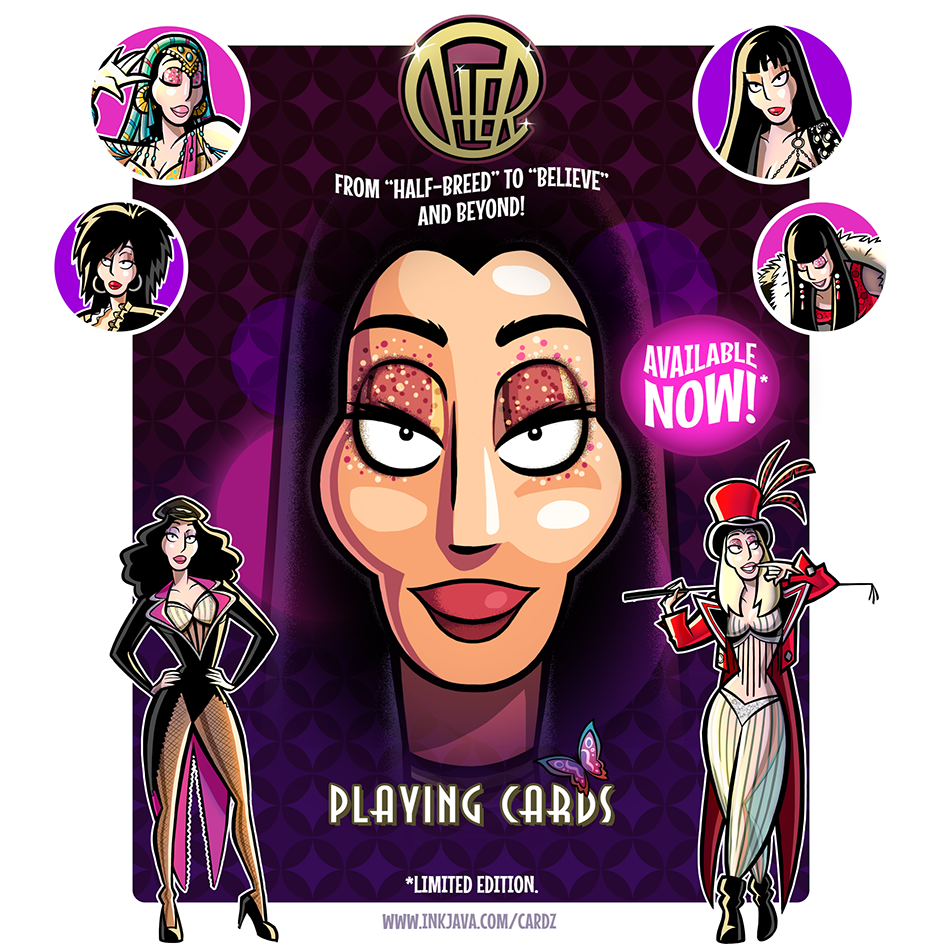 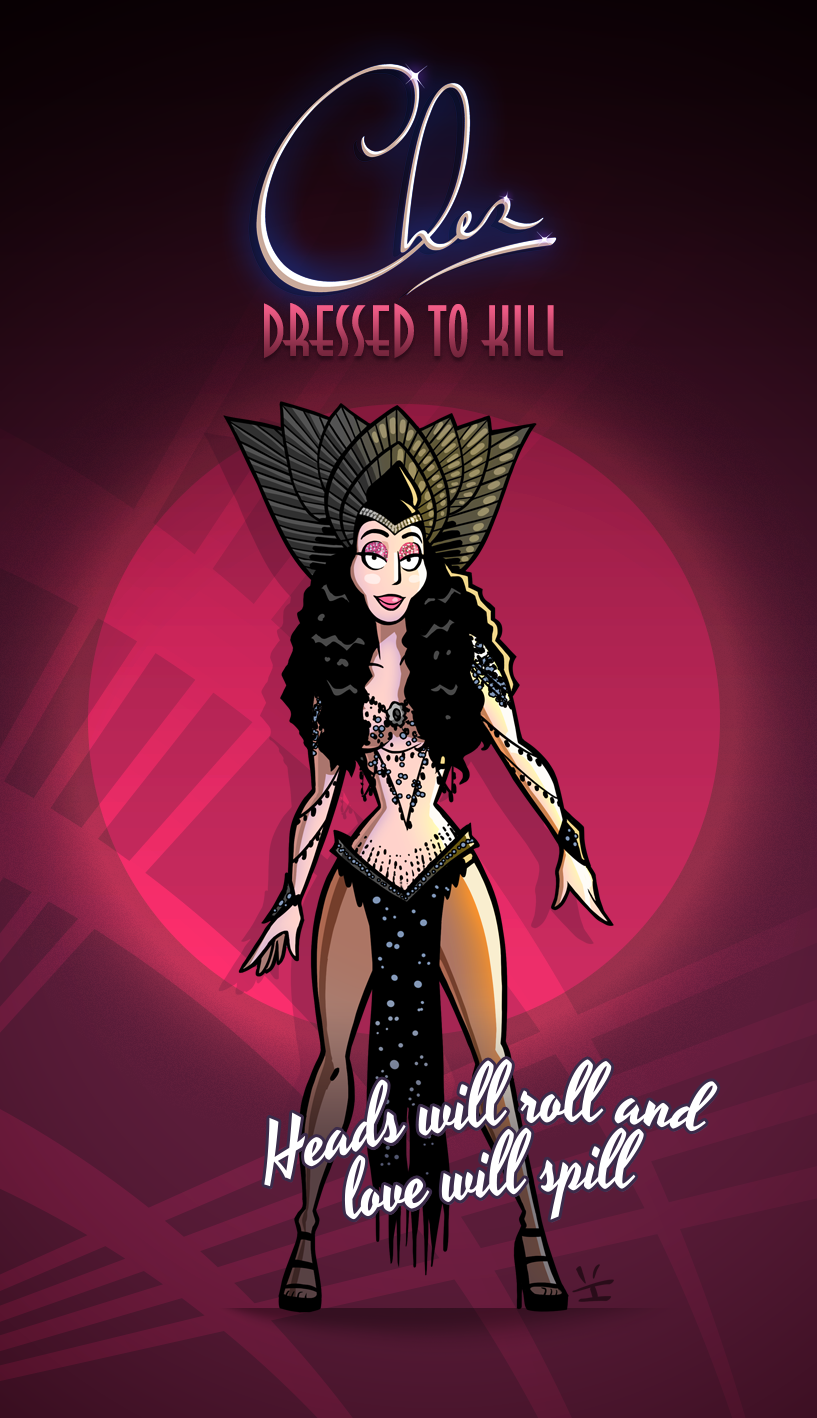 Greetings, fellow Cher fans! Thanks to everyone who voted in the latest poll! The outfit for the vampirish Dressed to Kill number came out first, so hhhhere's the artwork! You can also grab the wallpaper version here.

I went to two D2K shows but didn't get the chance to see Cher and show her the playing cards myself. :(  Hopefully one of the decks I gave to crew members made their way to her. I was hoping she could see them first...

I think it's about time to release the playing cards, don't you think? I am figuring out how to manage the shipping so I'll do the announcement once it all makes sense.

In the meantime, I thought it would be fun to show you the process I go through for drawing a Cher artwork. ...From the very rough sketch to the final polished version! 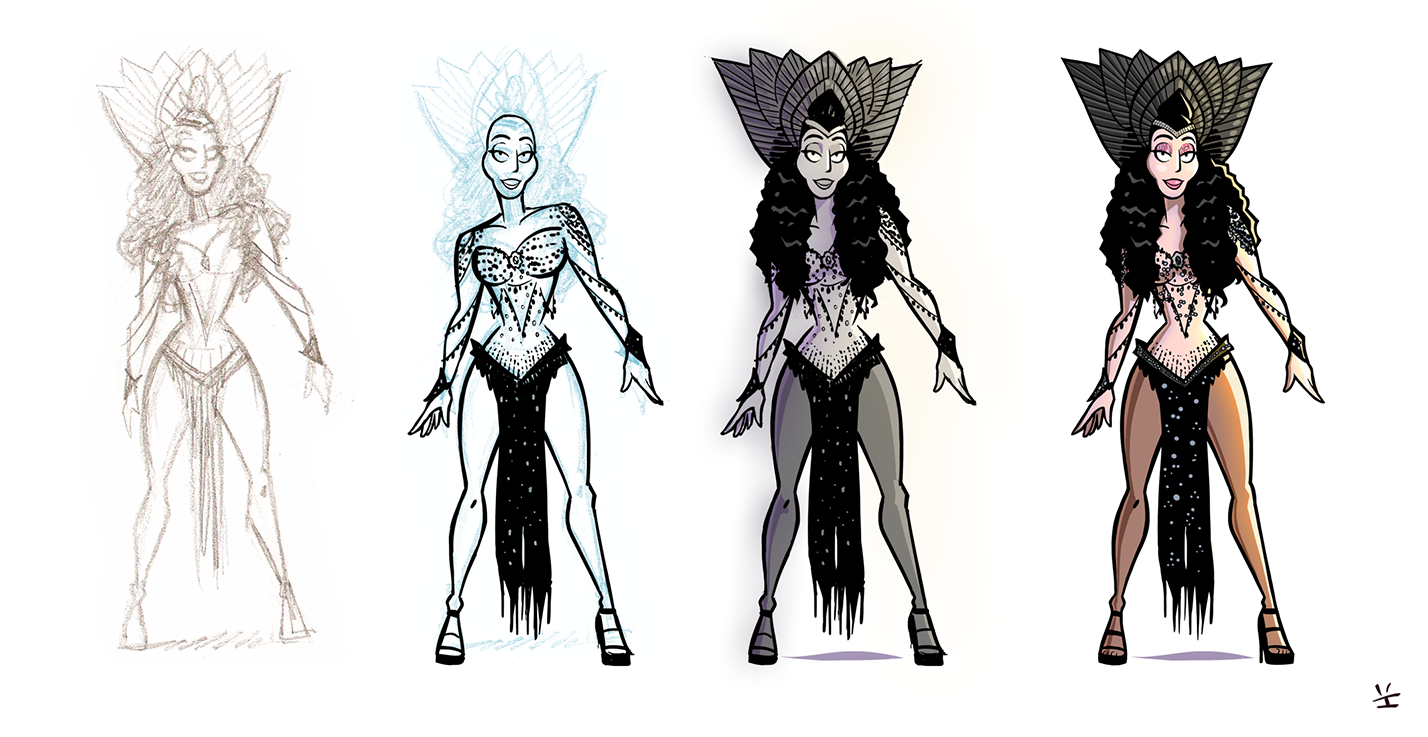 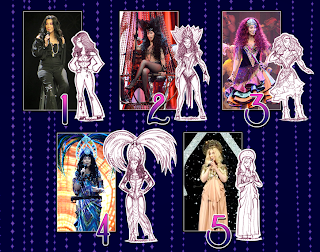 Greetings, fellow fans! Here's a couple sketches for five outfits from the D2K show. I will need your votes to determine which one I will polish next! The tour is coming to my hometown next week-end so I'll be traveling a bit to catch it a second time. It will be exciting to see what changes have come out from the tour's current short break since April 12! Starting this Wednesday it will introduce Cindy Lauper as the special guest, following Pat Benatar and husband Neil Giraldo who did the first 13 dates.

So, the contenders for the second D2K artwork are: #1 ballad-segment Cher (or the Jesse James is Walking in Memphis with a Heart of Stone outfit, pick your favourite), #2 the eponymous Dressed to Kill Cher, #3 Gypsy Cher, #4 Woman's World Cher (or Peacock goddess), and #5 the grand finale's Hopeful Cher (or the I Hope You Find It outfit).

I hope to get started on the next artwork soon! It will be sometime after I come back from the Ottawa show next week-end, but I'll try to have some new sketches done in the meantime. Until then, time to vote! The poll is in the left sidebar in case you haven't seen it.

Email ThisBlogThis!Share to TwitterShare to FacebookShare to Pinterest
Labels: Cher, D2K, Dressed to Kill, Gypsies Tramps and Thieves, I Hope You Find It, Walking in Memphis, Woman's World 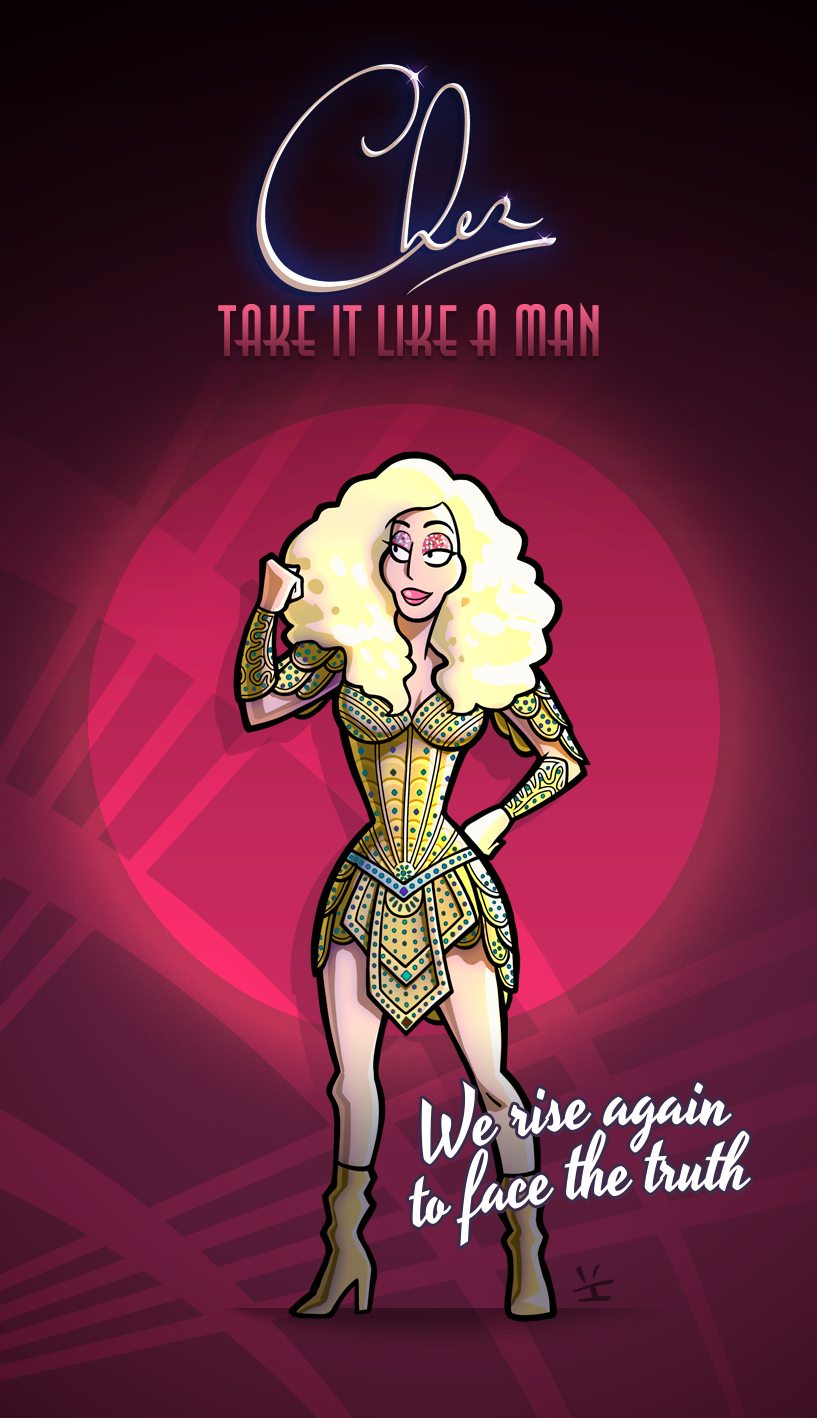 Here's the first artwork from the 2014 D2K tour! It's one of the few songs from her latest album that she performs during the show, and personally it was one of the most enjoyable number. Cher just seems to have a great time trotting across the stage and pushing the dancers away!


The D2K tour is getting rave reviews everywhere and the show in Toronto on April 7 was no exception! Cher was funny, generous, and top-notch on every note, and the stage transforms into a gazillion things from each costume change to the next. It was all rrreally impressive!

For sure it was nice seeing how Cher acted out on stage in each outfit. It gave me a better idea of the pose I should make for my artworks next. Now I can really get started!!

Go to the wallpaper section for Take It Like a Man!

Cher wallpapers poll Queen playing card Believe Gypsies Tramps and Thieves Just Like Jesse James A Song for the Lonely D2K Dressed to Kill Jack Strong Enough Woman's World A Cowboy's Work Is Never Done All or Nothing Dark Lady Take Me Home The Shoop Shoop Song Walking in Memphis sketch Burlesque Goddess of Pop Heart of Stone Hell on Wheels Love Hurts Mermaids Save Up All Your Tears You Haven't Seen the Last of Me card design After All All I Really Want to Do Colosseum Dead Ringer for Love Do You Believe? Fashion Half-Breed Human I Found Someone I Got You Babe If I Could Turn Back Time Joker Lady Gaga Laverne Living Proof Love and Understanding Main Man One by One Perfection Ringmaster Silver screen Take it Like a Man The Beat Goes On The Greatest Thing The Music's No Good Without You The Power The Way of Love We All Sleep Alone movie pirate playing cards Academy Awards Bad Love Bang Bang Batman Bob Hoskins Bonnie Tyler Catwoman Cintiq Closer to the Truth Disco Dov'è L'Amore Farewell Tour Harley Quinn I Hope You Find It Icon Jack Nicholson Meat Loaf Moonstruck Nicolas Cage Oscars Poison Ivy Reinvention Rock N' Roll Sonny and Cher Sonny and Cher Comedy Hour Stanley Tucci Stuck on You Wacom Welcome to Burlesque Witches of Eastwick ace of spade